Kouwei Uchiha (うちは甲, Uchiha Kouwei ) was a shinobi of Konohagakure's Uchiha clan who served as a warlord during the time of Okojo Uchiha's reign. and later bodyguard to Heiwa. He founded Shiryū alongside his brothers with the intention of restoring his clan to its former glory through infiltrating positions of higher power. Over the years he'd gained recognition outside of his duties as a Shinobi as a village elder. Using his financial influence to uproot many contending industries on an global scale. Before his disappearance he was revered as the innovative mind and creator behind many advancements regarding the technology and weaponry used throughout the Land of Fire.

Often described as inappropriately witty, Kouwei would certainly agreed that he's the textbook definition of insensitive. As the prodigal spawn to a former Uchiha Lord, Kouwei was used to being respected as a powerful and venerated figure at a young age. His immense abilities give him a self-assured confidence that borders on times outright cockiness, though not without the occasional offsetting humor accompanied by his presence. The most prominent trait when identifying his characteristics is slothfulness, which causes him to be selective and whimsical when it comes to fulfilling his duties regardless of their significance. There's a certain charm and charisma that Kouwei carries that causes individuals to gravitate towards him when he is present to actively interact. Much alike your typical narcissist, Kouwei's actions on and off the battlefield revolve around what benefits him most at all times, so his co-operation is often bound by the leverage held by other's when in a team setting. 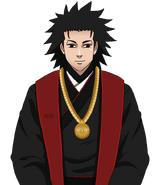 As an individual that claims to be the embodiment of beauty itself, Kouwei takes pride in the lengths he goes to maintain his youthful appearance. He is a tall well-built muscular man with black spiky unkempt hair. Unalike many of his proud clan members he doesn't find high collared outfits appealing. Instead he typically sports traditional monk garb received from his mentor, Okojo Uchiha. However, due to his sporadic decision making he tends to switch up his wardrobe depending on how he feels in order to remain cozy.

After satisfying his ideal sense of success within the village, Kouwei would be introduced to the path of monkhood when in which he'd then requested to be introduced to monkhood. Taking the required time away from the village in order to successfully climb to the peak of Mount Takama-ga-hara. Unknown to the masses before he was to leave the village he was in on an secret affair, held between Owa Sōzō and himself which ultimately led to three children and potentially the reason for his absence. Having not only found success as a ninja, but also businessman and governor, Kouwei was able to rapidly grow his influence whilst secretly building connections in foreign lands under the guise Gūtara.

Due to the inheritance of his dual-bloodline, Kouwei is known to boast chakra far exceeding that of the average Uchiha or Senju clansmen. As a child he was known to engage in arduous training sessions between his siblings in the Uchiha Compound. As the youngest of his kin, he'd naturally grown to surpass the limitations inherited by his brother's; through studying their methods alongside what was taught by their sensei. Kirinji Uchiha, being the most prominent in the use of genjutsu amongst them had been known to antagonize Kouwei when training. Concurrently this would stimulate Kouwei's growth in will power and spiritual energy. After returning from his training on Mount Takama-ga-hara, he was said to have recorded in his notes that as a result of his adaptation to atmospheric differences when nearing the peak of the mountain. Though he notes these experiences to be far more traumatic than beneficial, his body was able to surpass the standard limits exhibited by the norm.

Due to monks being able to convert solar energy into fuel for their spiritual energy and/or chakra, his reserves are primarily composed of Yin. This granted him a near unparalleled control over his chakra - to the point that he finds extremely little difficulty in manipulating his chakra into all kinds of shapes and forms. This further allows him to easily grasp most aspects of jutsu creation, analyzing and casting without the use of his ocular powers. The latter part is so expanded that he's capable of using high-level techniques and jutsu with just the minimum amount of chakra expenditure. One such as himself worries not when facing exhaustion as his reserves are constantly being resupplied through solar energy conversion.

Behind the gullible facade that Kouwei puts on, he is truly one of the most perceptive characters to date. During his travels he was able to visit and receive schooling in various dojo's and monasteries. Using his ability to mimic other's abilities and fighting styles, he was able to expand his understanding of martial arts and further prepare counters. When faced in battle or simply any situation that should require his utmost attention, he believes that any and every moment is critical. Choosing to push himself to evaluate every possible outcome to produce the best results within the shortest amount of time possible. His perceptiveness is often overlooked, because of the goofy outlook that he's gave off over the years. When in all actuality Kouwei is one of the most underestimated tacticians of his time. Having had access to data that had been gathered since the villages founding, Kouwei was able to use what's known as the most advanced shinobi technology to create and further advance some of the most renown scientific ninja tools known to date. In order to further his research and gain resources otherwise unattainable in his homeland, he's ventured to many foreign continents in hopes of advancing his education.

A major asset in which Kouwei's taijutsu fighting revolves around is his speed. Kouwei underwent massive training where he combined weighted exercises with the Body Flicker Technique as a method to increase resistance. With such a heavy resistance while moving at said speed, his muscles grew exponentially. Because his speed relies on free base movement rather than a strict formula anchor, Kouwei is able to achieve a wider range of feats. His speed is his defining traits. Even without Body Flicker, Kouwei's speed is enough to appear instantaneous. Shinobi alike confuse his movements with teleportation. He is known as someone who prefers to attack before an opponent has a chance to weave jutsu. Kouwei uses his speed to create a blitz style of battle. Rapid strikes, followed by his steps and afterimages. His speed can create intangible clones of himself without aide of chakra. However, these clones usually freeze in his last movement of their creation as they are created through burst.

As a man who was considered for the position of Hokage, one would take note of the vast knowledge Kouwei possesses regarding ninjutsu. One of the many qualifications for potential kage is knowing at least 1,000 ninjutsu, a feat that Kouwei easily obtained given his tutelage under the eighth Hokage, Okojo Uchiha. He has mastered all skillsets and combat forms of shinobi, and even is noted to have created a wide set of techniques himself. Having served as Hokage for six months he was able to obtain information on all of Konoha's techniques, their hijutsu included. Being the analytic that he is, Kouwei is able to deduce the mechanics of his opponents techniques without even using his Sharingan, able to predict the likeliness and nature transformation of a technique based on the woven hand signs.

One would be wise to avoid engaging in a battle of illusions with Lord Kouwei. Using the teachings of the Eighth Hokage, he's been able to further refine his application of genjutsu techniques and even develop multiple forms of combating them. Those who find themselves victim to Kouwei's demonic illusions are said to at times leave these mental assaults far beyond repair, possessing the strength to shatter reality itself. As an Uchiha, he retains the ability to see through genjutsu using the Sharingan to recognize flaws and influences within the tenketsu. He is able to liberate each others from genjutsu. Through eye contact, he can literally insert himself into other's genjutsu freely allowing him to break whatever genjutsu it is that imprisons his comrade. After falling prey to his sensei's traps countless times, Kouwei took the time to train himself in order to counter these techniques. He primarily focuses on the Body Consciousness to continue fighting should the scenario arise where his mind has been infiltrated.

As descendant of the Uchiha Clan, Kouwei has been bestowed with his lineage's birthright, the cursed bloodline that is is the Sharingan. Despite his young age, he had already fully matured his dōjutsu by the time he encountered Okojo Uchiha. By Kouwei's own admission, his eyes were the key to survival for several years. Using his ocular prowess he was able to learn the basics of combat and chakra manipulation through simple observation and mimicry of various combatants. Furthermore, with the employment of subtle hypnotic suggestion, Kouwei was able to harmlessly manipulate civilians into providing him with housing, funds, or supplies he needed after his parents untimely passing. His insight has become great enough to identify the composition of any technique if given enough time. This has allowed him to become intrinsically familiar with dozens of trends associated various advanced natures and even hiden techniques, allowing him to begin preparing an effective countermeasure before the enemy's technique is likely formed.

Community content is available under CC-BY-SA unless otherwise noted.
Advertisement